1997-2000 The Royal Academy of Music in Stockholm, Composition diploma 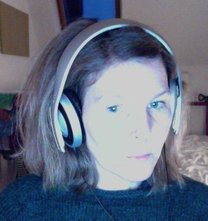 Member of the board of ISCM, the swedish section

in Stockholm, the institution for conducting and composing,

mentor and responsible for seminars of Estethics etc.

2001- Different comissions as a Freelance writer(music) and

consultant work for The department of Culture, the Swedish

Scholarships and awards since 2000:

” Now I jump over to another subject and a tips of radio – about sound art.

Because my god, the meeting with Ylva Nyberg Bentancor in ”Musikmagasinet Klang”

in P2 last Sunday, and her recorded voices, horses, cars and rain in Mongolia

made me sit like in trance in front of the radio.”

Among the work there are several examples of Nybergs sense for telling a drama.”